Back to Home
Kanto
Hoenn

Now we jouney west of Kanto into the Johto region. The games based off of these regions are arguably the best games of the franchise. Why? Gamefreak thought those games would be the final Pokemon games, so they poured their heart and soul into these games (and probably why the remakes are called Heartgold and Soulsilver, which are also really good). With that out of the way, the three starters here are Chikorita, Cyndaquil, and Totodile. Chikorita by far the least popular, so I will talk about it first, then go up on the popularity chain. Is the least popular starter the best one? 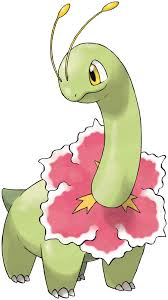 Chikorita, the grass type, looks absolutely adorable. Unfortunately, that is where its glory stops until Kanto. For those who don't know, you go to Kanto after defeating the Elite Four and challenge the gyms there. However, at that point in the game, your team is very diverse and can really do Meganium's job for it. This makes it clear that Meganium is the WORST starter for Johto. Let me explain why in performance and not why it is the least popular.

After completing a task for Professor Elm, you go on to Violet City, where the first gym is. Falker, the leader there, uses Flying pokemon, which use moves that Chikorita is weak against, and its STAB moves will barely do anything against it. And that is just the beginning of its struggles.

Next, in Azalea Town, the player challenges the second gym, whose leader is Bugsy, who uses Bug types, hence the name. Chikorita's STAB grass moves will not even leave a scratch on his team, especially Kakuna and Scyther, who take 1/4 damage from grass moves. Needless to say, even if Chikorita is a Bayleef at that point, that scyther will wreck it easily. Then, in Goldenrod City, you challenge the third gym leader, Whitney, who uses normal pokemon. It doesn't seem too bad, right? WRONG! Her Miltank will easily wreck her, and we all know how and why. Bayleef will have a very hard time being victorious over that thing (to be fair, though, all three starters will suffer against Whitney, and the player's team won't be diverse enough to counter it very well at that point. So what the pros recommend is to catch a Drowzee and trade it for a Machop there. It will rip Whitney apart easily). The worst part is you cannot make further progress in the game until you beat Whitney, because a Sudowoodo is blocking the way, and the item to get rid of it can only be obtained AFTER BEATING WHITNEY.

After you get all of that out of the way, you challenge Morty, the fourth gym leader, in Ecruteak City. Morty uses ghost pokemon, which doesn't sound too bad, but his team is also part poison, which is resistant to grass moves. Though his team doesn't have poison moves, Bayleef won't be able to touch it much, because its STAB moves are not very effective, and its other moves have no effect, and they are immune to poisonpowder. So use something else for this fight.

Next, you will have to travel across the sea to Cianwood City, because the Olivine gym leader, Jasmine, is caring for the sick pokemon atop the lighthouse, and the medicine is in Cianwood. Along the way, trainers mainly use water pokemon, which Bayleef/Meganium will thrive against. However, the wild pokemon are mostly Tentacool and Tentacruel, which are part poison, and can take it out if you are not careful. At the Cianwood gym, Bayleef/Meganium will actually be able to stand its own against Chuck. He has a Poliwrath, which is a water type, and a Primape, which is neutral against Bayleef. After, you return to Olivine.

After giving Jasmine the medicine, you can challenge her. She uses steel pokemon, which resists grass moves and are immune to poison. Long storg short, this fight will give Meganium a very rough time, so use another team member.

At Mohogany Town, you cannot challenge the gym there until you beat Team Rocket at the Lake of Rage. Team rocket mainly uses dark types and poison types. Their dark types are usually the Houndoom line, which is part fire, and their poison types will wreck Meganium as well. Now to the gym. Pryce, the Mohagany Town gym leader, uses ice types. Since most of his team is also water types and his Piloswine is part ground, Meganium may potentially do well against them with grass moves, but the ice typing makes it a little risky. I recommend you use it only if absolutely necessary. After, you fight Team Rocket at the Radio Tower, which are stronger poison types and Houndoom line, so at that point, I hope that you have members on your team that can counter those pokemon!

At the last Johto gym in Blackthorn City, you will battle Clair, who uses dragon pokemon. Dragon pokemon resist all of the elements except for ice, so Meganium will have a hard time with that gym (though for here, all three starters struggle in this fight as well, but now your team should be diverse enough to fight for them). After defeating her, she becomes a sore loser and sends you to the Dragon's Den, which isn't too hard.

After the eighth Johto badge, you head east to Kanto to challenge the Elite Four. The first member is Will, who uses Psychic Pokemon. He has a Slowbro, which Meganium will do well against. However, it will suffer against the rest of his team, which consists of 2 Xatu, a Jynx, and an Exeggutor.
Next Elite four member is Koga, the former leader of Fuchia City gym. He still use poison types, which will slaughter Meganium. To make things worse for it, they have additional typings that make Meganium suffer more. After that is Bruno, who uses the same team as in the gen 1 games, except one Onix is replaced with a Hitmontop. Meganium will wreck the Onix, and do neutral against the rest of the team. However, I would still watch out for Hitmonchan's fire and ice punches, even though they are special in this gen. The last Elite Four member is Karen, who uses dark pokemon. Meganium can hold its own against her Umbreon, but not for the rest of her team. She has a Vileplume (which isn't dark, but still), Murkrow, Gengar, and a Houndoom as well, which all resist Grass moves. So once again I advise use other pokemon for this.

With the Elite Four out of the way, there is one more trainer before you can challenge Kanto. The champion himself, Lance! He still has his 3 Dragonite, but now he has a more diverse team. His entire team is part flying, which will create problems for Meganium. For the last time, leave that in another pokemon's hands.

After triumphing over the Elite Four and Champion, you can now go to the rest of Kanto! HOwever, it along with Red have similar matchups to the Gen 1 games, which is covered in the Kanto page. So now I will just jump to Meganium's summary.

Summary of Meganium's performance in a nutshell:

In this gen, Meganium gets jipped. It gets better later, but even so it is the worst starter for Johto. 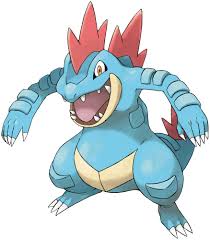 Feraligatr, the water starter, does better than Meganium in a Johto playthrough, but it has many issues as well:

Feraligatr's performance in a nutshell

Feraligatr does a better job than Meganium in a playthrough, but the third starter outclasses the other two by a landslide. 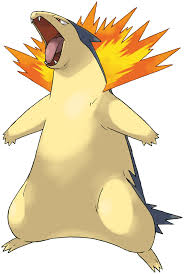 Typhlosion, the fire starter, is easily the best starter in Johto. Its stats and movepool blow the others out of the water, and does the best in a playthrough. It can also get Thunder Punch! The list is a big one.

Typhlosion's performance in a nutshell